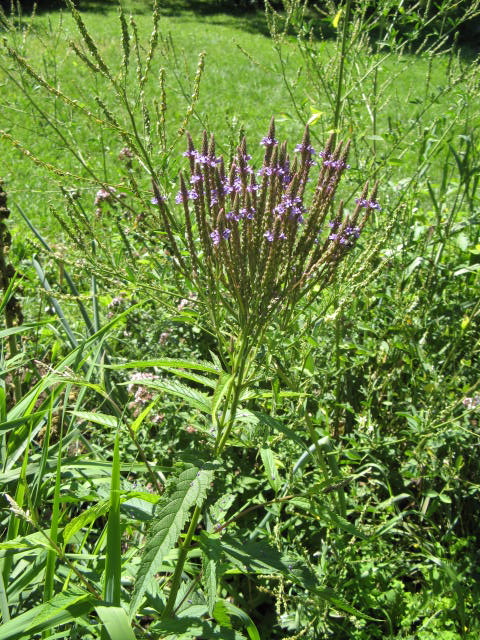 One of the advantages of having a fairly open immigration policy in my organic garden is that I occasionally get a plant moving in who dramatically raises the biodiversity of my yard. I had thought the plant pictured above was a nettle until it bloomed in purple. (I have a fondness for nettles and plan each year to make nettle soup but always forget to harvest the nettles when they are still young and tender and so they flourish unmolested in my garden).

A quick consult of Linda Kershaw‘s Ontario Wildflowers revealed the mystery plant was a Swamp Vervain (Verbena hastata), a perennial that is native to southern Canada. Kershaw also relates that Swamp Vervain (as its name implies) prefers moist open areas. My garden is open full to the south but is rarely a particularly moist habitat. I guess the rainy summers we’ve been having the past couple of years have convinced the Vervain otherwise.  According to Evergreen Canada’s on-line database of native plants it is also known as Blue Vervain and is found from Ontario to Nova Scotia.

A note on field notes. I have chosen to include information that I have stumbled upon about the flora and fauna of Ottawa as part of this blog because it is important to me to acknowledge the other beings who make their home here. The least I can do as a member of a multi-species community is learn the names of my neighbours and some of their preferences and dislikes. I have been inspired in this project through reading The Cincinnati Arch: Learning from Nature in the City, a memoir by John Tallmadge in which he relates his own awakening to the co-existence of nature and the urban. He writes that he always prided himself on his knowledge of the flora and fauna of the wilderness areas he vacationed in. However, once he awakens to the presence of nature in Cincinnati, he is appalled by his almost complete ignorance of nearby flora and fauna. As one of his key practices of urban environmentalism, he sets out to learn about the other organisms that live in Cincinnati.  Reading his memoir while sitting on my front porch one summer day, I too was forced to face the level of my ignorance and so I’ve set out to fill in some of the gaps in my knowledge.