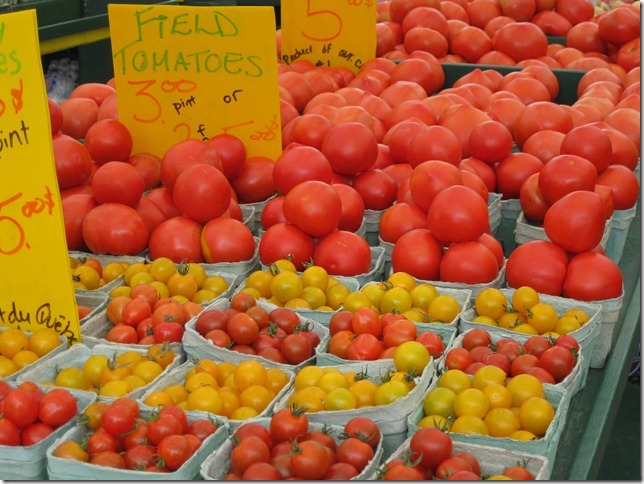 It might be mid-August, but there’s plenty of summer left. Some suggestions to make the most of it (click on the highlighted links for more information):

Amber Westfall leads the next Herbs and Wild Foods Plant Walk on Saturday, August 18 at 2 p.m. On Sunday, August 26, you can hop on a bike and join Just Food for a cycling tour of urban agriculture and community gardening sites.

If thinking about that makes you hungry, check out Savour Ottawa’s Harvest Table on Sunday, August 19, when local farmers and chefs join up to use what’s in season to create a five-course lunch. Or find a farmers’ market near you. Despite this summer’s drought, there’s plenty on offer at the Byward, Parkdale, Main and Ottawa Farmers’ Markets, the Ottawa Organic Farmers’ Market and the many other markets in and around Ottawa and Gatineau (including a new Ottawa Farmers’ Market satellite opening in Westboro on August 18). See OttawaStart.com’s guide for a list of markets and locations.

Indoors, the Ottawa Public Library’s Nepean Centrepointe branch invites you to learn about the World of Ponds on Thursday, August 16 at 7 p.m. On Tuesday, August 28, Fair Trade Ottawa and the Canadian Organic Growers’ Ottawa Chapter will show the documentary film What’s Organic about Organic? at Library and Archives Canada at 7 p.m.

Time to get everything back in balance? The International Stone Balance Festival is coming to Ottawa August 18-19, thanks to Ottawa Rock Art; you’ll be able to see the work of stone balance artists from several countries at scenic Remic Rapids on the Ottawa River. Later this month, yoga on Britannia beach on Saturday, August 25 at 9 a.m. celebrates healthy green spaces in support of the Sierra Club of Canada, while yoga in Orleans Ridge Park on Tuesday, August 28 at 7 p.m. assists WaterCan’s clean water projects in east Africa.