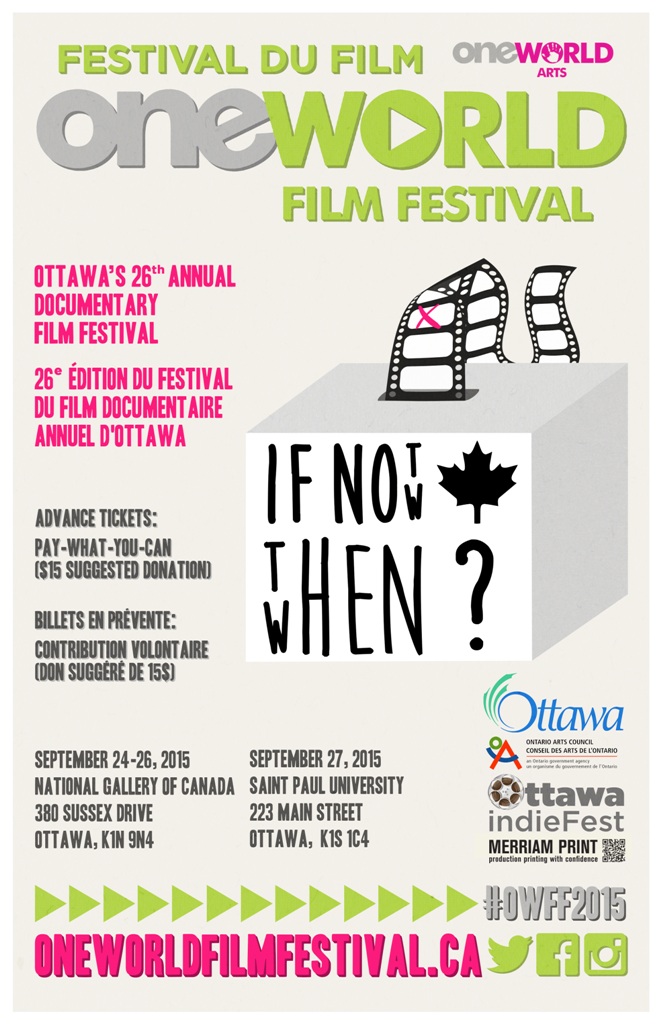 The One World Film Festival has been going strong for a remarkable 26 years. It brings moving and thought-provoking documentaries and talks on global and local environmental, social and political issues to Ottawa audiences.

On Thursday, Sept. 24, “Documenting Democracy” includes the films My Enemy, My Brother (Canada), set in the Iran-Iraq war, and Democrats (Denmark), on politics in Zimbabwe, followed by a panel discussion featuring Carleton University’s Institute of African Studies. Hosted by Alan Neal (CBC).

Friday, Sept. 25’s session “The Kids are All Right” includes The Year We Thought About Love (USA), focused on a group of LGBTQ teens, and Landfill Harmonic (USA), on Paraguayan musicians who make instruments out of garbage, as well as a candidates’ debate on LGBTQ issues. Hosted by Paramjit Rai (MASC).

Saturday, Sept. 26 is “Our Home on Native Land.” First up is an Ottawa Indie Fest of short documentaries including a Q&A with filmmakers, and the movie Honour Your Word (Canada) and discussion with Algonquins of Barriere Lake, hosted by Alanis King. Next up are screenings of After the Last River (Canada), on the environmental and justice issues faced by Attawapiskat, and Haida Gwaii on the Edge of the World (Canada), as well as a panel on Aboriginal law and mining. Hosted by Waubgeshig Rice (CBC).

Also on Saturday, Sept. 26, the Festival is offering “Bring the Kids!” It’s an afternoon of youth programming, including gardening, art and wilderness skills, with teacher Brittanie Goodfellow and Roots2Fruits’ Alister Ogui Auge and Brittany Boychuk.

On Sunday, Sept. 27, everyone is invited to attend “Actions Speak Louder Than Words,” a day of free films, discussions and workshops. Topics range from food security and land grabs in West Africa, to conflict resolution, Syria and refugees. Inter Pares, Canadian Institute for Conflict Resolution and Oxfam Canada will help guide discussion on what we can do about ongoing environmental, social and political challenges.

Check the One World Film Festival schedule for screening times, further details and updates. Hope to see you there!