Here are a few more upcoming initiatives that are all about food.

The Mayfair Theatre presents The Fruit Hunters (Canada 2012) a film by Yung Chang about “the little-known sub-culture of people who scour the world in search of rare, endangered and exotic fruit.” It runs Friday, Feb. 8 through Monday, Feb. 11, 2013 (check the website for showtimes).

Growing Food in a Hungry World: A Farmer’s Perspective is a discussion about farming trends, particularly the pressure on farmers to increase production although the demand for organic, local foods is increasing. The speaker, Paul Slomp, runs Grazing Days, a local grass-fed beef operation, and has worked on food issues locally and globally. The event takes place at Octopus Book’s Centretown location (251 Bank St., 2nd floor) on Wednesday, Feb. 13, 2013 from 12 noon to 1 p.m.

Always wanted to try your hand at farming, or interested in finding out more about what it takes to set up a farm? Check out Just Food’s new Start-Up Farm Program. It offers access to land, shared equipment, and training—no experience necessary! Applications for 2013 are due by Friday, Feb, 22 at noon. For more information, see Just Food’s website, or attend an information session on Wednesday, Feb. 13, 2013, 7-8:30 p.m. at the Just Food Farm, 2389 Pepin Court. If that sounds like too much of a commitment, check out Just Food’s farm internships.

If you happen to have a maple tree in your yard, you might be interested in Fulton’s Backyard Sugar Makers’ Workshop on Sunday, Feb. 17 and Monday, Feb. 18, 2013 from 12:30-2 p.m. They’ll teach you how to tap your tree for sap that you can turn into maple syrup. $20 per family which includes a take-home kit for tapping. It’s at Fulton’s Pancake House and Sugarbush; call ahead for information.

If you’re interested in gardening and want to get together with other people with a love of growing food, consider attending The Forming of an Edible Gardens Ottawa Group: Meeting 1, organized by the Ottawa Gardener. It takes place at the Ottawa Public Library’s Hazeldean Branch, Tuesday, Feb. 19, 2013 from 6:30-8:30 p.m.

It’s the gift-giving season. But some recent illnesses among family and friends have left me thinking about how little meaning a lot of our “stuff” has in our lives. What’s really important is the here-and-now, the time we have together.

So I’m wishing for you and your loved ones the gift of time.

As for seasonal posts, I don’t think I can do better than offer that you re-read Alette and Eloise’s 2007 posts on “thingless giving” and greening the holidays. You’ll find them here: https://greenlivingottawa.com/2007/12/

Thanks and all the best for the holiday season.

A bright light has gone out in Ottawa. The ‘Morning Star,’ though, continues to illuminate our way.

On August 3, Algonquin Elder William Commanda – whose name, Ojigkwanong, means Morning Star – passed away at the age of 97 at his home in Kitigan Zibi near Maniwaki.

Commanda, also called “Grandfather,” was a spiritual leader, teacher, former chief and much more – a trapper, guide and expert canoe maker, and a spokesperson for the environment and for peace among cultures. He was active internationally, but his efforts to promote respect for the earth often centred on Ottawa. He spoke out against pollution of the Ottawa River and destruction of the South March Highlands. He described the South March Highlands as a site of irreplaceable biodiversity and archaeological heritage, and “a most sacred landscape.” I heard him speak eloquently in January about the need to preserve the Beaver Pond Forest.

Grandfather Commanda was also working toward the establishment of an indigenous centre, Asinabka, on Victoria Island and at Chaudière Falls to serve as a national historic site and a peace-building and environmental centre.

He was given the key to the City of Ottawa in 2006, named an Officer of the Order of Canada in 2008, and received a lifetime achievement award from the National Aboriginal Achievement Awards Foundation in 2010. He greeted the Dalai Lama and Nelson Mandela during their respective visits to Ottawa in 1990 and 1998, received numerous other awards and honours for conservation and peace, and featured in several documentaries including the National Film Board’s Ojigkwanong: Encounter with an Algonquin Sage.

Grandfather was also keeper of three sacred wampum belts, which he said documented and guided relationships among people and between people and nature. He founded the Circle of All Nations, a group “committed to respect for Mother Earth, promotion of racial harmony, advancement of social justice, recognition and honouring of indigenous wisdom and peace building.” He advised on ecological issues and appeared at several United Nations conferences.

His messages of reconciliation and environmental stewardship inspired many people. Earlier this year, after he said that the Beaver Pond Forest was sacred, Daniel Bernard Amikwabe kept a Sacred Fire burning at the Forest to protest its destruction. Others have spoken of the importance of carrying on his work.

In a letter dated January 6, 2011 to Ottawa’s Mayor and City Councillors about the South March Highlands, Grandfather wrote: “…in the final analysis, we are all connected – with the water we drink, the air we breathe, with the food, medicines and gifts the earth provides us, with the animal teachers, with the larger universe, and with each other.” Words that ought to continue to guide our decisions and choices.

An event to celebrate the natural world and honour Grandfather Commanda will take place at Beaver Pond Park, at the end of Walden Drive in Kanata, on Saturday, September 10 from 6 a.m. to 11 p.m. The event will include a Sunrise Ceremony and Sacred Fire, Barbecue Lunch and Dinner, an edible plant walk with Martha Weber, a cycle with Kurtis Benedetti, a photo contest, music, guest speakers and more. See http://www.union-algonquin-union.com/ or http://www.facebook.com/?ref=home#!/event.php?eid=258047284219720 for details. Everyone is welcome, and donations and volunteers for the event are also appreciated. 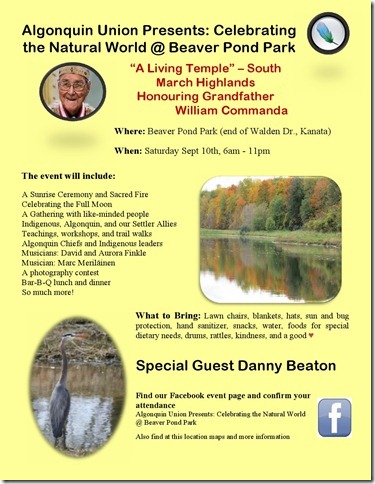 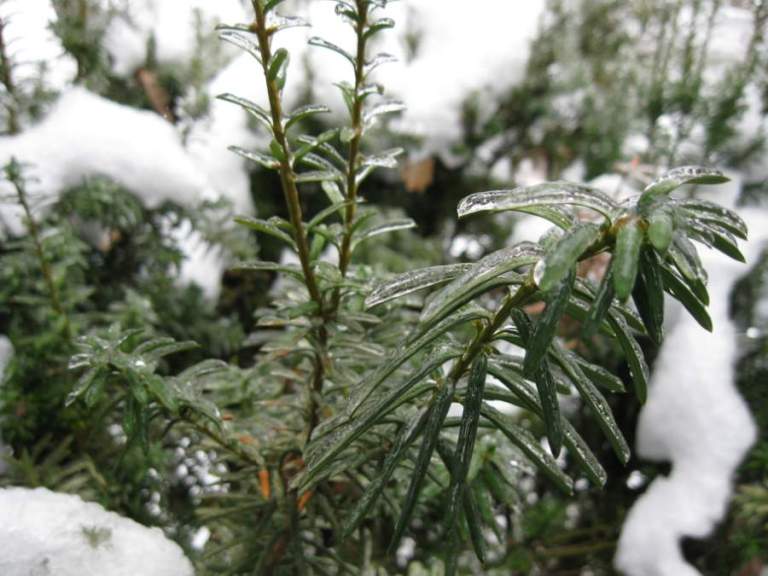 Ottawa City Council will start debating the city’s 2010 budget on January 25.  It’s not Copenhagen, but Council’s decisions will directly affect the health of Ottawa’s environment and people.

Ecology Ottawa has examined the environmental implications of the draft budget.  They identify encouraging aspects such as support for new cycling paths and investments in pedestrian infrastructure and in energy-efficient improvements in city-owned buildings. But they also point out areas of concern, including:

Residents can express their views on the budget by:

The draft budget is available on the City’s website or at public libraries and city client service centres.

World leaders are meeting in Copenhagen over the next two weeks to negotiate a new global climate agreement.

Between December 11th and 14th, Canadians will be organizing and attending events across the country to send a clear message: The world wants a real deal. That means a climate agreement that is fair, ambitious and binding. Rallies in support of a real deal are being held in major cities in Canada and around the world on December 12th as part of the Global Day of Action.

In Ottawa, there are a number of vigils scheduled.  To find one near you, visit http://www.climateactionnetwork.ca/e/action/events/real-deal.php#map .  Or, if you’re going to be downtown this Saturday, come stop by the Human Rights Monument for a short vigil, at 6pm.

Vigil for a REAL DEAL to stop climate change, hosted by Climate Action Network Canada and Friends will start on Dec 12, at 6:00 pm at the Human Rights Monument on Elgin, between Laurier and Lisgar (beside city hall).

We will have a brief address on the week’s happenings.  Following this, we will sing three climate carols and we will light our candles and hold a moment of silence.  Candles and carols will be provided to you when you arrive.  For those of you who wish to continue your involvement after the vigil, we will be walking together as a group to gently canvass and give out our candy canes to the general public down on the Hill.

Welcome news for anyone who’s looking for more ideas for living sustainably:

Adria Vasil, author of Ecoholic and columnist with Toronto’s NOW Magazine, will be in Ottawa to talk about her new book, Ecoholic Home.  She’ll be speaking at Arbour Environmental Shoppe, 800 Bank Street, on Monday, November 9 at 7:00 p.m., courtesy of Arbour and Octopus Books.

Ecoholic Home is full of advice about products and services for greening the place where you live.  It reviews electronics, gardening, energy, cleaning, decorating, renovating and more.

Vasil’s 2007 book, Ecoholic, covers health and beauty products, food, clothing, children’s stuff, household items and transportation.  It has lots of suggestions for environmentally friendly and healthy options, from making your own toothpaste to safe food storage, where to buy recycled office supplies, and alternative gift ideas.

Vasil also helps interpret “green” labeling, and suggests sources for more information.  And it’s not just about consuming consciously.  Ecoholic also has a section on how to influence “big issues” like climate change, deforestation and clean water.

Ecoholic Home, like Ecoholic, is based on Vasil’s writing for NOW Magazine.  Both books are available in bookstores and the Ottawa Public Library.

They’re all accepted as part of the City of Ottawa’s Green Bin program.

The City launched the program on September 21, with an event at City Hall, an interactive website, and displays of green bins in public places, like my local library branch and community centre.  Collection from green bins doesn’t start until January 2010, but the bins and accompanying white kitchen containers will be delivered to most residents between now and December.  Service to some highrise apartments and some rural residents will take a bit longer, according to the City’s website.

The material that the City collects through the Green Bin program will go to an Orgaworld processing plant in southeast Ottawa, where it will be converted into compost.  Orgaworld will retain 90 percent of the compost and the City of Ottawa 10 per cent, which it will use for city and community-based greening projects.

The City estimates that currently about 45 percent of garbage by weight of an average Ottawa household consists of compostable organic material that can now go into the green bins, and be reused as compost.  Better than going to landfills, if all works as planned.

I was pleasantly surprised by the range of stuff that can be put in green bins, much more than I put in my backyard compost, so I’m looking forward to receiving mine.

There was an error retrieving images from Instagram. An attempt will be remade in a few minutes.